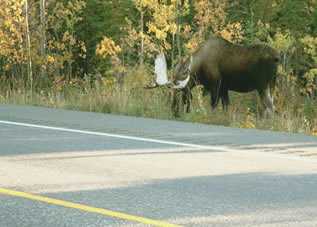 With an estimated population of 175,000 moose in Alaska, it’s inevitable that conflicts with vehicles will occur on our highways . Alaska experiences about 765 animal-vehicle collisions a year, 85 percent of which involve moose.  About 11 of these collisions result in serious injury or death to a motorist. The average human and societal cost of each crash is estimated to be about $34,000.

The Alaska Department of Transportation and Public Facilities is teaming with the Department of Fish and Game to reduce the number of motor vehicle crashes involving moose on Alaska roadways.  Crash data analysis shows that moose-vehicle collisions are most prevalent on higher volume roadways in Alaska where favorable habitat for moose exists.  When motorists are aware of the high likelihood of moose in the roadway, they can exercise appropriate caution.

The two departments seek ways to help motorists more safely transit “moose country,” work cooperatively with each other during highway project development to identify improvements and countermeasures that reduce collisions, and collaborate on research to better understand moose populations and habitat in ways that help avoid or reduce the risk of moose collisions.

The Wildlife and Highways Workgroup is currently comprised of three staff from each agency:

Wildlife and Highway Memorandum of Understanding

Hitting a Moose Can be Hazardous to Your ... Pocketbook