In Alaska you can find a lot of history right under your tires. And now a book produced by the Department of Transportation and Public Facilities, Historic Roads of Alaska, provides a highly visual account of some of this state’s most storied roads.

Featured roads range from the Southeast Panhandle to the Nome area, and from the Gulf of Alaska to the North Slope; from long-distance, frequently traveled highways like the Alaska and Richardson Highways, to more remote examples like the Williamsport- Pile Bay Road.  They represent the broader legacy of Native trails, of gold rushes and World War II; of tourism, resource development, and community growth.

Some excerpts from the book: 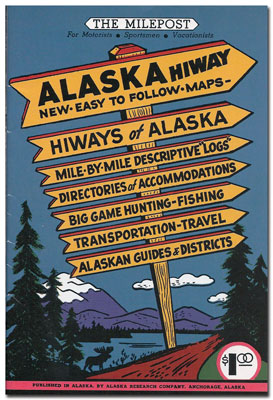 The first edition of The Milepost, published in 1949.

Building a road in Alaska is not as simple as clearing a path and laying asphalt or concrete. Across the more than 600,000 square miles of its territory are numerous construction challenges to highway engineers: rugged mountains, glacial rivers prone to flooding during breakup, soft and wet muskeg, and permafrost under 80 percent of the ground. On top of those elements, Alaska has some of the most extreme climates in the country, from -80°F in the winter to 100°F in the summer, with heavy snowfalls common from the early fall to the late spring. The road builders in Alaska have had to learn how to overcome these challenges, often through experience and trial-and-error, to come up with techniques to safely and efficiently create highways in Alaska.

The Richardson Highway was the first road in the territory of Alaska to expand from a long-distance trail to a road. Most overland travel before its construction was either local in nature, or was by pack train in summer or by dogsled in winter. The military initially built a wagon trail to the interior of Alaska to support freight movement to and from new gold producing areas, and then improved it as its economic importance increased. As it transitioned from the Valdez-Eagle Trail, to the Valdez-Fairbanks Trail, to the Valdez-Fairbanks Road, to the Richardson Highway, it became the first long-distance, all-weather road, and the main route of Alaska’s development in the first half of the 20th century.

A map of the roads featured in this booklet.

Driving the highway in those initial years after it was opened to homesteaders in 1946 and then to the public in 1948 took more than a little planning. In addition to needing to know the route and gas requirements, travelers needed to bring extra auto parts, prepare to sustain themselves on the road by eating in their cars or trailers, and be ready for emergencies with first aid kits and other supplies. Perhaps most importantly, they needed to prove to the authorities that they were prepared with all of this material. There were checkpoints along the road in these first years where the Royal Canadian Mounted Police (RCMP) would check that travelers had their first aid kit; ax and shovel; tire chains; two spare tires and tubes; jack, tow rope; etc.

Much of this (Seward Highway) construction work was destroyed just a few years later, when the Great Alaskan Earthquake struck on March 27, 1964. Twenty miles of the highway sank five to nine feet, below the high-water mark of Turnagain Arm, and the high tides that followed damaged other sections of the road. Both of the communities of Girdwood and Portage situated along the highway were destroyed by subsidence and the tides, with Girdwood being relocated inland and Portage largely abandoned. Many bridges along the highway were damaged, some beyond repair. In Seward, underwater landslides deepened Resurrection Bay and swallowed parts of the dock and rail yard, two loading cranes, and forests. Fires broke out throughout the town, and residents found themselves unable to leave after the bridge that crossed Resurrection Creek on the highway out of town was damaged.

In all, the quake caused more than $21 million [$160 million in 2017] in damage to the Seward Highway. The State of Alaska spent much of the next several years cleaning up and rebuilding along the Seward Highway. With money and assistance from the federal government, debris was cleared away, bridges were rebuilt,
and roadbed and rail lines were shifted to higher ground. 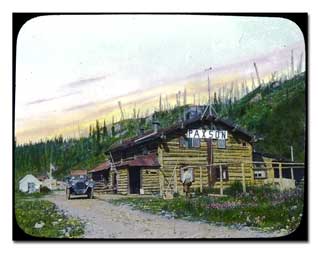 Paxson's Roadhouse at the Richardson Highway milepost 185, near Summit Lake.

This publication does not address eligibility for the National Register of Historic Places.  For that information, please see the DOT&PF Historic Properties webpage, Historic Roads Consideration.

Download an 11 MB copy of Historic Roads of Alaska:

[an error occurred while processing the directive]