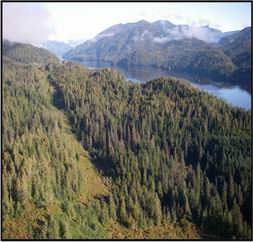 September 7, 2011 The DOT&PF conducted an open house at the Ketchikan Gateway Borough’s Assembly chambers to provide information on the project and to receive public questions and comments. Afternoon and evening sessions were held, to which more than 50 people attended. In response, more than 20 comments were received to date. Four alternatives were presented, plus a no-build option. Below are summaries of the public comments and the respective issues.

Based on the outcome of reconnaissance work summarized in the 2012 Reconnaissance Report, DOT&PF began preliminary design on the recommended road alignment and has started the environmental review for the project.  An application for a U.S. Army Corps of Engineers (USACE) permit has been submitted, and the Public Notice for the project application is available at http://www.poa.usace.army.mil/Missions/Regulatory/PublicNotices.aspx.