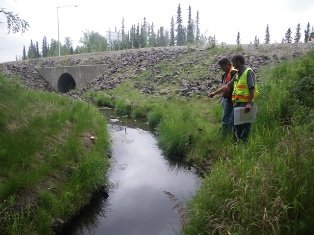 The Northern Region Hydraulics Group’s area of responsibility covers approximately 416,000 square miles, roughly 65 percent of the state’s total land area.  This Region extends from the Alaska/Canada border in the east to Gambell, on St. Lawrence Island, in the west; Cordova in the south to Barrow in the north.

The Northern Region Hydraulics Group has primary responsibility for the following: