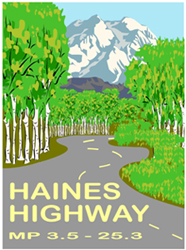 The first stage of the Haines Highway project, which began in August 2005, included preliminary alignment analysis, scoping, and environmental review. However in September 2006, the first stage was suspended due to shortfalls in state transportation funding. Work was restarted on the environmental assessment in November 2008.

With the release of the Environmental Assessment (EA) in July 2013, and release of the draft revised EA in October 2015, many comments were received. While many in the community voiced support for the proposed action, other comments focused on potential cultural, economic, and environmental impacts. Those comments have been considered and addressed in the Final Revised EA and summarized in the Finding of No Significant Impacts (FONSI). (Click here for the final revised EA, FONSI & other documents)

The Alaska Department of Transportation and Public Facilities (DOT&PF) and the Federal Highway Administration (FHWA) has taken the time needed to incorporate comments and responses. We have consulted with the National Marine Fisheries Service (NMFS), U.S. Fish and Wildlife Service (USFWS), U.S. Army Corps of Engineers (USACE), Alaska Department of Natural Resources, the Alaska Department of Fish and Game, and the U.S. Coast Guard to discuss redesign efforts especially in areas proposed for fill in the Chilkat River and in high value wetlands. Additional field studies are complete and available here.

As a result, the project team has reviewed all the comments, evaluating alternative designs and mitigation opportunities and released a Final Revised Environmental Assessment and Finding of No Significant Impact (FONSI) in August 2016.

Construction between MP 3.9 and MP 12 will be complete in fall 2019. Construction of the remainder of the project will begin between 2020 and 2023.

Because of the number of comments and the serious concerns raised, accomplishing these steps has taken time. We know you are interested in our progress and we will continue to update you.