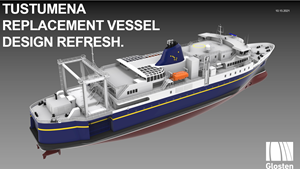 The MV Tustumena was built in 1964 and serves the communities of South Central, Kodiak Island and Southwest Alaska. It is one of two ocean class vessels in the Alaska Marine Highway System (AMHS) fleet. Because of its size and design, it is the only AMHS vessel that is capable of serving all 13 ports of call between Homer and Unalaska. MV Tustumena is 296 feet long and 59 feet wide, with a domestic gross tonnage of 2,174 and a service speed of 13.3 knots.

Retiring and replacing the M/V Tustumena with a vessel that provides greater capacity, modernized safety features, increased seaworthiness, and enhanced passenger comfort will ensure reliable marine transportation service well into the future for the communities, residents and businesses in South Central, Kodiak Island and Southwest Alaska.

Check out the latest design refresh presentation here with this interactive flipbook.

The State of Alaska Department of Transportation & Public Facilities Marine Highway System determined in mid-2018 that the Construction Management/General Contractor (CMGC) project delivery method is the best approach to use to construct the Tustumena Replacement Vessel. CMGC will allow the selected shipbuilder to assist the AMHS by providing verification of the final design, assisting in locating domestic sources for components, consulting on ways to minimize operations and maintenance costs, considering innovative materials and methods, and constructing the vessel in a manner that minimizes impacts, reduces risks, and provides cost savings through efficient scheduling and use of construction materials.

What are the characteristics and capacities of the TRV?

The replacement vessel design is highly-constrained and includes:

Why replace the M/V Tustumena?


The vessel is nearing 60 years of service and lacks capacity. It can only accommodate 36 vehicles and 174 passengers. There is increasing demand for car deck capacity between Homer and Kodiak. Also there is an increasing demand for car deck capacity for the Aleutian Chain route. The increase in the discovery of wasted steel and cracking during annual maintenance availabilities accelerated the need to replace the vessel.

Will the cafeteria dining schedule be more frequent with new design?


The design of the dining facilities of the new vessel provide cafeteria style dining similar to the M/V Kennicott and it will be feasible to provide extended dining hours. Additionally, the dining area will be accessible outside of published meal hours whereas the current Tustumena's dining area is not.

Can the design consider an exterior bow observation deck similar to the Tustumena/Kennicott?


The area forward of the Forward Lounge is accessible in the latest design with limited standing and walking space. Access to the lower bow area forward may be restricted for passenger safety.

Is the design considering the capacity needs for the future 50 years rather that than the current need?


A traffic study has been completed and the design capacity of the vessel is based on the results. Passenger capacity is increased from 174 to 250 (44% increase) with vehicle capacity increasing from 36 vehicles to 52 vehicles (44% increase).

Will the new vessel fit at both Pier 1 and Pier 2 in Kodiak?


Yes. The new vessel's protrusion towards the facilities forward and astern when at pier 1 are not substantially different than they historically have been with the existing Tustumena. A full terminal compatibility report has been completed and is available online in the Recon Report. This sketch shows how the vessel sets at Pier 1 compared to the existing vessel.

What are the specific design improvements in relation to public feedback?


Specific design improvements include a safer and larger vehicle elevator, a single passenger boarding ramp with access from the dock to the various passenger decks capable of adjusting for tide and vessel loading conditions, optimized lounge space with the forward lounge viewing area as unobstructed as possible, a larger solarium with optimized viewing areas, and more ADA staterooms. The addition of aft side and stern doors, so as to accommodate floating vehicle ramps, should they be built.

Is the vessel being designed to consider a future transfer bridge and float dock in Kodiak/Homer?


Yes. The vessel will be able to load using either the vehicle elevator or floating docks similar to those in SE Alaska and Prince William Sound.

Does the design consideration include shipping needs for fresh seafood freight capacity, considering that the AMHS is the most efficient option available?

What alternative designs have been considered to increase capacity? What would the design look like were it to provide for a 300 passenger capacity?


Several different concepts for the passenger decks were developed for the AMHS Steering Committee to review. The current design incorporates the Steering Committee input in terms of both capacity and arrangement. The most visible changes of increasing to 300 passengers would be larger lifeboats and more life rafts, which would require reducing the solarium and food service areas.

What design accommodations have been made for domestic animals?


A dedicated pet area has been established in the aft vehicle deck area.

Why not consider dredging at communities where vessel depth is being limited, thereby reducing the car deck capacity due to depth limitations?


The only port that would benefit from dredging, as it would apply to the Tustumena replacement vessel, is Seldovia. The draft restrictions in Seldovia are something that can easily be scheduled around. This is something routinely done for other vessels at other ports, so dredging the port of Seldovia, although nice, would not noticeably change service to that community.


The speed of the new vessel is increased over the current Tustumena, going from a normal cruising speed of 13.8 knots to 15-16 knots. The new vessel design includes a power margin for maintaining 15-16 knots in sea state 4.

What is the design of the engine room - is it automated?


Current drawings are available on the website. The design is working towards ABS Automatic Centralized Control Unmanned (ACCU) certification.

What are the plans for the Tustumena once the new vessel has been built and is operational?


Current plans are to retire the Tustumena.

What is the budget for construction of the Tustumena Replacement?


Currently, the Department has $10 million to complete the design of the ship during the CMGC Preconstruction Phase. The final cost of the vessel construction costs is estimated around $250 million but the exact cost will be determined during design and negotiations with our Shipyard Contractor.

Can the AMHS host a public meeting prior to final design?


Public comment throughout the design period is welcome through the portal on this site. Collecting comment and providing review and response in this venue will allow concepts, ideas, and concerns to be addressed during design as opposed to trying to handle them once design is near completion. A final design presentation will be provided through the website. As of now public in person meetings are not planned for.

How is the theatre going to be designed to take into future technology advancements?


The theater offers comfortable seating and the entire forward bulkhead of the space is available for mounting a display. There is nothing in the current theater design that prevents upgrades, based on current and near future technology. Future technology advancements will be evaluated and considered for inclusion during future upgrade periods.

Does the Kennicott sail full from Homer to Kodiak?


This varies significantly. Summer of 2013 the car deck was nearly full on all sailings between Kodiak and Homer. So far this season, the car deck is usually between half and two thirds full. The passenger limit of 499 is rarely approached.

Will the new Tustumena be home ported in Kodiak?


The hailing port on the stern of the vessel has not been determined. Homer, where the crew changes and storage facilities exist, will continue to be the port where operations are based out of.

How will a name be chosen? Will you consider a name and design elements relative to the regional native influence?


Historically, all AMHS vessels have been named after glaciers. How the name is selected is accommodated for in Alaska Statute 19.65.020.

What is the peer review plan prior to final design?


Peer Review will be an ongoing effort during design development. An Internal Advisory Board comprised of current and past Tustumena crew, terminal management, other interested AMHS staff, and other parties is already engaged. The final design will be reviewed by this team as well.

Is the State of Alaska considering the modification of terminal facilities serviced by the Tustumena, to include a floating transfer bridge accommodation?


Not at this time, however, the replacement vessel will have the ability to side or stern load at facilities with transfer bridges.

Will the State of Alaska increase service to the SW communities?


Yes, in that the ship will be able to carry more vehicles and passengers at a time. Due to the distance between ports in SW, it is not likely the frequency of trips will increase significantly.

Will the Tustumena Replacement infringe on the adjacent property tideland leases at Pier 1 in Kodiak?


There will be no impact on the Pier 1 adjacent owner's property rights. Access impacts during maneuvering into and away from Pier 1 Kodiak will be studied during the design process however, the replacement vessel will be substantially more maneuverable than the existing Tustumena with twin bow thrusters and steerable podded propulsors.

Will the car elevator operate more efficiently than the current Tustumena elevator?

How will the hull be designed to accommodate the weather the vessel will encounter - draft, stabilizers?


The Tustumena replacement vessel will have more draft and displacement than the existing Tustumena which should help improve vessel performance in heavy weather. The new vessel will have both active fin stabilizers and fixed bilge keels to improve vessel ride performance similar to Tustumena and Kennicott. Vessel motion studies are being done to predict new vessel performance and provide a comparison to the Tustumena and Kennicott in various sea states, vessel headings and vessel speeds.

Will the vessel be able to withstand falling off a wave such as the Tustumena did when the force of the landing snapped the beam?


The new vessel's structure is being designed to American Bureau of Shipping Rules for ocean going vessels and will be suitable for operation in heavy seas.

Will the vessel be able to take a rogue wave should the captain have enough knowledge to navigate her through one?


The new vessel is being designed to meet the American Bureau of Shipping Rules and US Coast Guard's stability requirements for ocean going passenger vessels which includes severe rolling.

What about icing up in the winter?


Allowances for icing during operation are accounted for in the vessel stability analysis as per the requirements of ABS, USCG, and best practices in vessel safety and stability.

On December 4, 2021, Alaska Governor Mike Dunleavy and Transportation Commissioner Ryan Anderson announced their plan to re-energize the Alaska Marine Highway System. Among the significant capital investments is a new ocean-class vessel to replace the 57-year-old Tustumena ferry. The complete press release can be found here

Marine highway upgrades are highlighted on the Re-Energize AMHS factsheet

On March 23, 2022, AMHS issued a Request for Proposals (RFP) for a replacement vessel. The RFP asks for proposals from qualified companies to provide preconstruction services under the Construction Manager/General Contractor (CM/GC) project delivery method for the new ferry. Click here to read the complete press release.

Get Involved with the Project