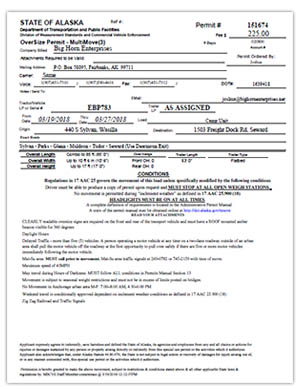 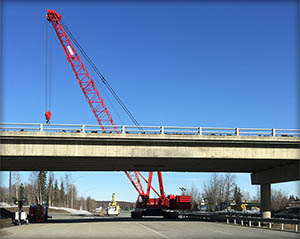 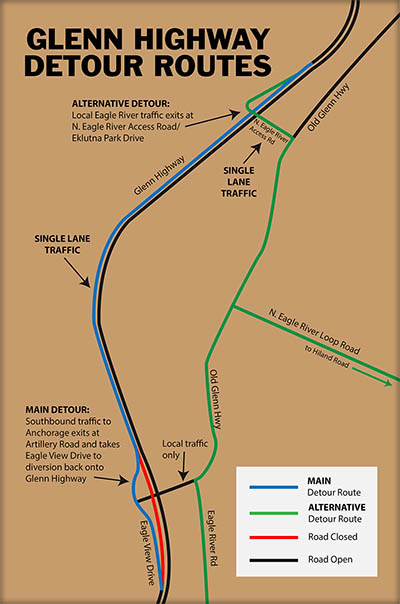 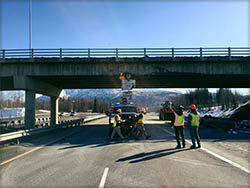 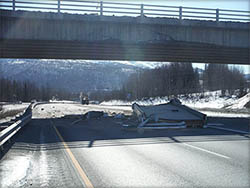 DOT&PF staff extends a thank you to the community for their patience while we removed the damaged span, and to the Anchorage Police Department and Municipality of Anchorage for assistance during this event.

The department expects the Monday morning commute to proceed as normal.

Crews finished removing the second half of the girder early Sunday morning at around 1 a.m. The Artillery overpass remains closed so the contractor can install new new barrier rail and new pavement markings for traffic control. We anticipate reopening to east/west traffic later this afternoon.

Next steps include disposal of the girder, cleaning up the area, and demobilizing the equipment.

Reopening of the southbound Glenn Highway is on schedule for Monday morning, March 26.

At noon today, the Artillery Road Bridge over the Glenn Highway will be closed to traffic. Traffic will be rerouted by detour to the nearest overpasses. This will be approximately a five minute detour. We apologize for the additional detour. This is necessary to enable crews to safely cut and remove the bridge girder and keep on schedule for what we continue to hope will be a Monday morning opening.

The Alaska Department of Transportation & Public Facilities (DOT&PF) Division of Commercial Vehicle Enforcement (CVE) issued a citation to the commercial driver for “Failure to Comply with the Conditions of Permit” for the March 21, 2018 bridge strike at the Eagle River Bridge at Artillery Road. The citation is not criminal and the driver’s name is not publicly available.

The citation will be forwarded to the Alaska Court System in Anchorage. The penalty for this type of citation can range greatly and depends on extenuating circumstances such as driver history. Such penalties may have further implications such as insurance requirements for the driver and carrier.

The department will continue working to recoup costs for the bridge repair in the upcoming months.
A copy of the oversize permit is shared on this page.

Alaska Bridge Design measured the bridge at 17’6” in southbound lanes not 18’6” as originally reported.

Early this morning, the new Glenn Highway detour route was completed and traffic is now moving with minimal delays. We recognize that commuters stayed home today to help alleviate the traffic, we appreciate you! We are working as quickly as is safely possible to get the highway open again, and we know this closure is a huge inconvenience. Sandstrom & Sons is mobilizing to remove the damaged bridge girder and concrete. We still anticipate having the highway reopened by Monday morning. We want to give a special thanks to Anchorage Police Department for their assistance, they’ve been amazing!

The Department of Transportation & Public Facilities is establishing a new Glenn Highway detour route that will be in place for the Friday morning commute for southbound traffic through Eagle River.

After following emergency procurement processes, a contractor is now mobilizing to remove the damaged girder from the overpass at Artillery Road. At this time crews estimate the Glenn Highway will reopen to traffic by Monday morning. The detour is expected to be in place until Monday.

The new detour route should relieve congestion for local traffic in Eagle River, but travelers should still anticipate significant delays. Commuters who travel to Anchorage through this section of the Glenn Highway are encouraged to work from home on Friday if possible.

The southbound lanes of the Glenn Highway were closed Wednesday after the Artillery Road Bridge over the highway was severely damaged when it was struck by a truck with an overheight load.

There will be no changes to the detour during the afternoon/evening commute home. The outbound lanes of the Glenn Highway will remain open. Inbound traffic will continue to be diverted onto the North Eagle River Road exit and diverted back onto the Glenn Highway from the Hiland Road exit.

Our partners at the Department of Transportation (DOT) is leading the investigation. APD is assisting. DOT inspectors found the damage to the bridge to be incredibly dangerous. The bridge span was pulverized, lost structural integrity and is at risk of falling. Crews will work on removing the damaged bridge span which will take several days. Once removed and deemed safe by DOT, the detours will be lifted and the Glenn Highway will resume regular traffic flow. Replacement of the bridge span will come at a later time.

A new detour for Friday’s morning commute is being developed. As soon as the plan is finalized, a Nixle with all the details (including a map) will be sent.

Regardless of the new detour, traffic will remain heavily congested in the area until the Glenn Highway is reopened. Please plan accordingly.

If you don’t need to travel in the area, don’t. If you have the option of taking the day off from your job, working from home or coming in late, please do.

If you do need to travel in the area, leave early, travel at a safe distance from the vehicle in front of you, follow officers commands and detour signs, don’t attempt short cuts, don’t speed and practice patience.

Additional officers will continue to remain in the area to help with traffic control and make sure everyone gets to their destination safely.

Finally, please don’t call 911 unless it’s an emergency. Dispatchers were inundated this morning with 911 calls about the traffic situation. 911 is for emergency calls only.

Thank you for everyone’s cooperation and patience during this difficult time. We understand.

A Message from Department of Administration Commissioner's Office: For Executive Branch Employees who live in Eagle River and North.

Due to the continued issues on the Glenn Highway, we are allowing executive branch employees who work in Anchorage but live in Eagle River and North to not report to work on Friday, March 23.

We will be in contact with DOT/PF over the weekend and send out a message on Monday morning letting you know what the schedule is for Tuesday.  Monday is Seward's Day and a regularly scheduled state holiday.

Thanks for your patience during this time—DOT/PF is working hard to get the traffic moving as smoothly as possible as fast as they can.

The state office closure notification line and website will be updated as new information becomes available. You can also get updates on the statewide toll-free line at 1-877-326-5551 or by visiting the website at www.alaska.gov.

Emergency Closures – Make sure you are signed up to receive texts/emails about office closures or delayed openings. You should sign up with a phone number/email that you will receive during off work hours. All employees should sign up here:  https://public.govdelivery.com/

March 22, 2018, 11:00am
The southbound lanes of the Glenn Highway remain closed at mile 13, near Eagle River. Yesterday, the Artillery Road Bridge over the Glenn Highway was severely damaged when it was struck by a truck with an overheight load. The closure is estimated to last 3-5 days.

The bridge is not safe to travel under due to damage to a girder. The concrete around the girder was crushed when it was hit, so while the concrete remains in place, there is no structural integrity on this part of the bridge. Traffic above the bridge is being shifted away from the damaged girder. The concern is that the 200,000-pound bridge girder could potentially fall onto the Glenn Highway.

Traffic is experiencing lengthy delays. If you must travel through this area, expect detours and delays. Southbound traffic into Anchorage is currently being detoured at the North Eagle River exit, through Eagle River and back to the Glenn Highway from Hiland Road. This emergency detour was implemented last night after it was determined that it was not safe to travel under the bridge. This continues to be a developing situation. All detour solutions are currently being reviewed and a new detour route will be announced in the near future.

All staff are working diligently to get the highway open as quickly as is safely possible. The Glenn Highway is a vital transportation route and traffic is greatly inconvenienced by the delays. Emergency repairs are in the works to remove the damaged span in the next few days, allowing the road to reopen. At this time repairs are estimated at $1.8 million.

March 22, 2018, 8:30am
Eagle River Rd/Artillery (east/west connection) is OPEN. Lanes are narrow and shifted to the south. Please reduce speed. No overweight loads. Glenn Highway southbound mainline remains CLOSED. Old Glenn/Hiland is detour. DOT&PF is working on an emergency replacement of the damaged span. We will post more information as it develops.

March 21, 2018, 9:10pm
Due to the significant damage to the overpass, the inbound lanes of the Glenn Highway will remain closed indefinitely. The closure could possibly last 3-5 days as DOT&PF crews work to repair the bridge. For the Thursday morning commute into Anchorage, traffic will be diverted off of the Glenn Highway at the North Eagle River exit. Drivers will follow detour signs through downtown Eagle River and back onto the Glenn Highway from Hiland Road. If you are planning on traveling in the area during this time, including students heading to school via bus or other means, please plan accordingly and drive safely. APD will be deploying extra officers in the area to help monitor the situation and control traffic so everyone gets to their destinations safely.

March 21, 2018, 1:18pm
An 18-wheeler on the inbound Glenn Highway has collided with the South Eagle River overpass. All inbound lanes are now closed at that location. If you are inbound on the Glenn and headed to Anchorage, you need to exit the Glenn using the North Eagle River exit, and then get back on the Glenn via the Hiland exit. The Department of Transportation is enroute to the scene to inspect the overpass.

Above Photo Banner: Early spring view of the Glenn Highway near the exit to Matanuska Glacier. Photo by Dave Krause, Alaska DOT&PF