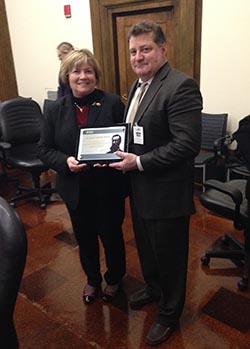 (ANCHORAGE, Alaska) – The Alaska Department of Transportation and Public Facilities (ADOT&PF) is pleased to announce Nicholas Mastrodicasa has been awarded the US Geological Survey’s Henry Gannett Award.  This national award recognizes distinguished contributions to the topographic mapping of the United States.

Mr. Mastrodicasa has been involved with efforts to map Alaska since 2006.  As manager for the Alaska Aviation Safety Project, he recognized the critical need for improved topographic data for Alaska to support pilot safety and rescue efforts. This effort led to the Alaska Statewide Digital Mapping Initiative and the development of an elevation requirements study for Alaska.  He has since facilitated the funding and ongoing efforts to modernize Alaska mapping. Accurate elevation data is critical to economic development, resource management and public safety.

“I applaud Nicholas for this well-deserved recognition and thank him for his ongoing and steadfast efforts to build the collaboration between state, local, and federal agencies advancing this important project,” said ADOT&PF Commissioner Marc Luiken.