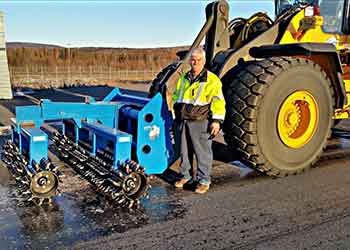 “This revolutionary icebreaker will result in significant cost and time savings, and may set a new industry standard,” said Alaska Department of Transportation and Public Facilities (ADOT&PF) Deputy Commissioner John Binder. “It’s the first time a member of ADOT&PF has been recognized by NASAO and is a huge honor for John and the department.”

As airports across the nation adapt to changing climates, the team at FAI came up with a unique idea to improve the removal of ice and compacted snow. Mr. Frison took the idea behind commercial icebreakers and designed an icebreaking machine named the Yeti.

The Yeti fractures ice on runways and taxiways by creating pockets in the ice allowing deicing chemicals to access the underlying asphalt faster. Not only does the Yeti crush ice and snow more efficiently, but it costs the state nearly 50 percent less to manufacture than it would cost to purchase a similar commercial product.

The award recognizes truly unique and service-oriented state aviation programs. Many innovative programs that begin at the state level are adopted by other states.

ADOT&PF encourages all employees to share ideas that make operational improvements. The Yeti was first submitted to the department’s “Everyday Lean Innovations and Ideas” program and was the winner of the Commissioner’s Innovation of the Year Award. It also received a Governor’s Denali Peak Performance Award honorable mention for Innovation in Cost-savings.

The Alaska Department of Transportation and Public Facilities oversees 237 airports, 9 ferries serving 35 communities along 3,500 marine miles, over 5,600 miles of highway and 839 public facilities throughout the state of Alaska. The mission of the department is to “Keep Alaska Moving through service and infrastructure.”