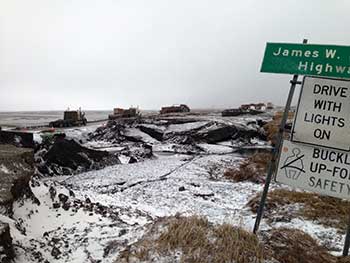 (PRUDHOE BAY, Alaska) – The Dalton Highway has reopened to traffic after an 18-day closure caused by massive spring breakup flooding.

Traffic began moving on the road at 8 a.m. this morning. The highway is open to two-way traffic, but drivers will encounter a section with flaggers and pilot car at Mile 412-414. The road remains in rough condition through the flood zone at Miles 392-414, with multiple narrow sections and an uneven surface. Drivers are urged to travel slowly and watch for signs.

The reopening of the highway marks a milestone for the Alaska Department of Transportation and Public Facilities (ADOT&PF), which has been handling the Dalton flood response since the initial overflow problems in March. The cost of this spring’s emergency response totals $15.5 million.

Flooding on the section of highway south of Deadhorse began in mid-March when overflow from the Sagavanirktok (Sag) River began spilling onto the highway. River aufeis accumulated in the bottom of the shallow and braided river and pushed the flowing water to the top, though temperatures in the area remained below freezing.

The water resulted in intermittent road and lane closures before eventually forcing a seven-day shutdown of the road between Miles 395-405 in early April. ADOT&PF and contractor crews battled the overflow by creating an extensive system of trenches to divert water away from the highway and by reinforcing berms along the road.

This initial overflow incident resulted in the first of two disaster declarations by Gov. Walker regarding the spring flooding.

On May 22, the arrival of spring breakup on the North Slope brought another round of flooding, this time on a larger scale than the area had ever seen. Water washed out several sections of the highway and inundated Deadhorse and surrounding areas. With this, Gov. Walker proclaimed a second disaster declaration, which included the entire North Slope Borough, including the highway.

“We want to thank everyone involved in this incredible effort,” said Mike Coffey, ADOT&PF Statewide Director of Maintenance and Operations and the State Incident Commander. “We would not be opening the road today without the cooperation and teamwork of every single stakeholder.”

The reopening does not mean an end to repairs and other work on the highway from Miles 392-414. While the initial emergency repairs have been finished, a planned construction project will start this summer between Miles 397-414, which will raise the grade of the road 3-7 feet and install culverts. That project is being constructed by Brice with an initial contract cost of $27 million, a supplemental agreement is still being finalized for work beyond the original contract. Other projects currently in design will address the road south of Mile 392.

A timeline and photos of the flooding and response efforts are available at the following websites:

For current conditions on the Dalton Highway, visit 511.alaska.gov or call 511.