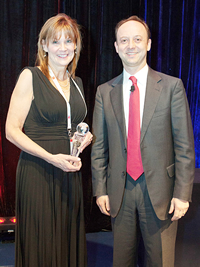 The ACE Awards, which are chosen by readers of leading industry magazine Air Cargo World, are widely regarded as the air cargo trade's highest prize, with the Diamond Award being the top honor. Anchorage Airport was given the award for being the highest-rated airport in the Americas in the 1,000,000-or-more-tonne (metric tons) category.

Trudy Wassel, TSAIA Division Operations Manager was in Shanghai for the Symposium and was on hand to accept the award. "It was such an honor and very exciting to hear our name called out during the ceremony," she said. "We knew we were nominated and had high hopes that our efforts during the past year would be recognized.”

"One of the things that make this award so special is the fact that it encompasses the entire airport community. Ground handlers, regulatory agencies such as TSA and Customs and Border Protection and the FAA air traffic control processes as well as the planning and maintenance that the airport provides are all voted on by the air carriers that use them." Airport Manager John Parrott added. “For an airport to win this award even once really shows how great teamwork and collaboration can contribute to the economic activity of an area.”

What is it exactly that sets Anchorage Airport apart from others in America and the world? Airport officials say plenty. Anchorage's location is the first thing that thrust the city and its airport to the forefront of the air cargo world. Being 9 1/2 hours or less from 90 percent of the industrialized world is an advantage that no other city on earth can match.

That alone might win business, but it won't win hearts, so TSAIA strives to go the extra mile by providing safe and efficient operations. The airport sports three two-mile-long runways capable of handling any plane in any weather.

Wassel points to their award-winning snow-removal operation, also, which has allowed the airport to operate without a snow closure for more than four decades. "I think people are surprised when they hear that Anchorage, of all places, never closes for snow. We have a crew that knows what they're doing and works around the clock."

Refueling at TSAIA is another area that sets it apart. Large freighters can land, refuel and be on their way in minutes. It is so efficient that even companies operating extra-long-range planes are finding that it's more profitable to stop through Anchorage, so they can carry less fuel and more freight.

It all adds up to being America's second busiest cargo airport and the sixth largest on the planet. It also adds up to an unprecedented fourth straight Diamond ACE Award.

Today aviation accounts for eight percent of Alaska's total economy and 10 percent of the total workforce, with TSAIA being the statewide hub of all that activity. It's comforting to know that such a large part of the state's economy is recognized as being among the best in the world.