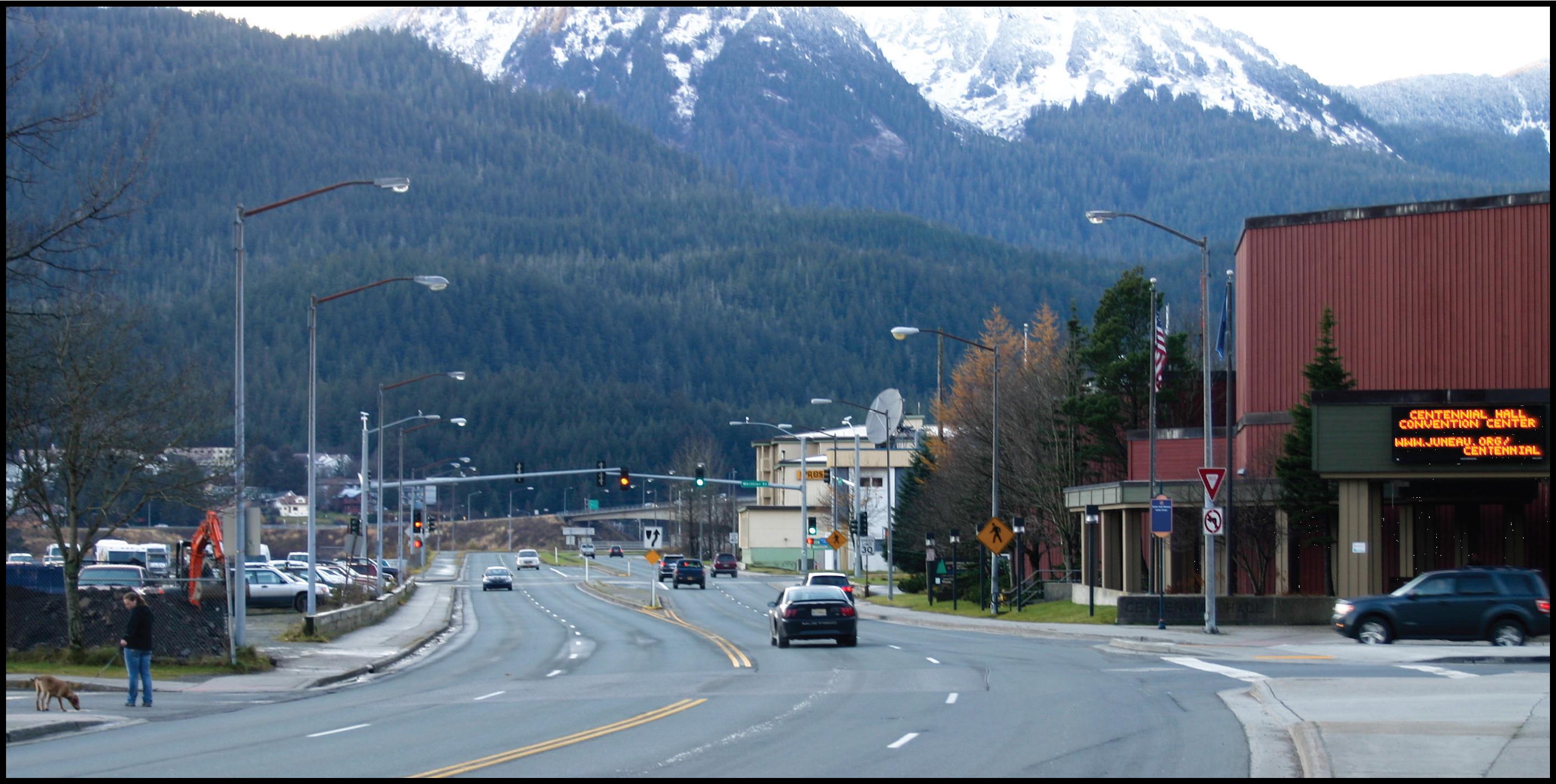 • Has DOT&PF considered what the public thinks about the proposal?

• I am concerned that reducing the number of through lanes on Egan Drive between Whittier and Main Streets will result in increased vehicle traffic congestion – has DOT&PF considered this outcome?

• What does DOT&PF know about how other reconfigured roads function?

• Will this reconfiguration work the same way here?

• Why can’t you acquire additional right-of-way (ROW), or reduce the width of the raised median, or use other methods to widen the road corridor so that the addition of bike lanes does not result in the loss of a driving lane?

• Won’t the addition of another marked crosswalk (at Willoughby Ave) cause further traffic slowing/jams?

• How is the proposed change consistent with DOT&PF policy and local CBJ land use and transportation plans?

• Has DOT&PF considered what the public thinks about the proposal?

DOT&PF received several comments from the public and stakeholders expressing concern that the proposed project would result in increased traffic congestion. As a result, DOT&PF reconsidered the concepts proposed and modified the project or added mitigation measures as described below.

• I am concerned that reducing the number of through lanes on Egan Drive between Whittier and Main Streets will result in increased vehicle traffic congestion – has DOT&PF considered this outcome?

Yes. The initial concepts presented to the public and stakeholders in April 2013 were based in part on guidance from the Federal Highway Administration on Proven Safety Countermeasures for roadway reconfiguration (see discussion below). A consulting firm specializing in these types of projects further developed the concept based on traffic study data.

The project would convert a portion of a four-lane roadway into two through-lanes with a center left turn lane. FHWA supports this reconfiguration because modifying four travel lanes to two travel lanes with a two-way left-turn lane reduces roadway crashes by 29%. Benefits to pedestrians include reduced crossing distance and fewer midblock crossing locations, which account for more than 70% of pedestrian fatalities. For more detailed information about operations and safety visit the Public Roads website (external link)

• What does DOT&PF know about how other reconfigured roads function?

Since 1972 the Seattle Department of Transportation (SDOT) installed 34 roads with a similar configuration, 15 of them since 2007. Common stakeholder concerns prior to construction have included impacts on traffic flow and congestion. SDOT conducts follow-up studies to determine the effects on each treated corridor, specifically comparing before and after conditions for:

• Volume of traffic on parallel arterials

Instead of increased congestion, SDOT has found an actual gain in efficiency by removing left turns from the travel lanes. In case studies from a number of different States, this approach has resulted in benefits to traffic operations, safety, and livability.

• Will this reconfiguration work the same way here?

FHWA has found that reconfigured roads with average daily traffic (ADT) of 15,000 or less have very good results. This road has an ADT of 13,400 as measured in 2011, thus supporting DOT&PF’s proposal to reconfigure through lanes on Egan Drive.

DOT&PF evaluated the Level of Service (LOS) for all intersections on Egan Drive between 10th Street and Main Street to compare current overall intersection function and critical traffic movement function to the proposed concept.    At the Whittier Street, Willoughby Avenue, and Main Street intersections, the proposed lane treatments in combination with changes in traffic light programming would maintain the same LOS rating for the critical peak traffic movements. Critical peak traffic is, for example, inbound traffic during the busiest 15 minutes in the morning or outbound traffic during the busiest 15 minutes in the afternoon.  The 10th Street intersection currently has a poor level of service rating and this project would neither improve nor decrease the function of that intersection.

• Why can’t you acquire additional right-of-way (ROW), or reduce the width of the raised median, or use other methods to widen the road corridor so that the addition of bike lanes does not result in the loss of a driving lane?

The inbound and outbound through-lanes need to be offset by 12 feet (10 foot turn lane and 2 foot offset) to allow for left turn lanes. The existing median ranges from 13-14 feet wide so 1-2 feet can be taken from the median, but additional width would still be needed. Some ROW would be acquired between 10th and Willoughby, but structures such as the Goldbelt Hotel and Merchants Wharf limit widening between Willoughby and Main. The remaining width would be gained by narrowing lane width from 10th to Main and reducing the number of lanes from Willoughby to Main.

• Won’t the addition of another marked crosswalk (at Willoughby Ave) cause further traffic slowing/jams?

Current lane widths are 12.5 feet; the proposed width would be 11 feet. Conventional wisdom is that use of narrower lanes would have negative impacts on safety and operations. However, provided that other geometric and traffic signalization conditions remain constant research shows no measurable decrease in urban street capacity when through-lane widths are narrowed from 12 feet to 10 feet (Highway Capacity Manual 2010). Narrowing lanes to 11 feet would not restrict traffic flow.

Oregon Department of Transportation Bicycle and Pedestrian Design Guide suggests narrowing travel lane widths to accommodate bicycle lanes should take into account the width of the center left-turn lane and posted speeds shown in the table below:

DOT&PF would maintain a minimum center left turn lane width of 12 feet to accommodate turning radii of buses and other large vehicles. Where the travel lane width would be narrowed to 11 feet, the posted speed limit decreases from 40 mph from 10th to Whittier, to 30 mph from Whittier to Willoughby, and finally to 20 mph at Willoughby and Main Street.

• How is the proposed change consistent with DOT&PF policy and local CBJ land use and transportation plans?

The CBJ, with input from the public, has identified the need for improved pedestrian and bicycle facilities in this corridor. The proposal is consistent with, and helps implement, many of the objectives in these local plans which include:

DOT&PF has coordinated with and is supported by CBJ on the proposed corridor. Additionally, the current Alaska Statewide Long-Range Transportation Policy Plan, Let's Get Moving 2030, recognizes the need to develop multimodal transportation systems that include bicycle and pedestrian facilities and advocates for coordinating with local communities and citizens to develop transportation systems. Currently no bicycle facilities exist between 10th street and the downtown core. Pedestrian use is already high and expected to grow as the State Library Archives Museum, Seawalk, and the Willoughby District Plan recommendations move forward. This project would consider the needs of all users as these community changes occur, improve the flow of traffic, and maintain safety for all users.